How To Build A Successful Career

When you finish this course, you will get a “Certificate of Completion”!
click to see a sample

Women's suffrage in the United States

From Wikipedia, the free encyclopedia
Jump to navigationJump to search
For the British and Irish women's suffrage movement, see Suffragette. 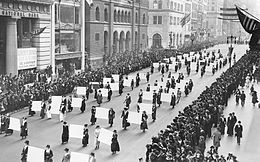 Women's suffragists parade in New York City in 1917, carrying placards with the signatures of more than a million women.[1]

Women's legal right to vote was established in the United States over the course of more than half a century, first in various states and localities, sometimes on a limited basis, and then nationally in 1920.

The demand for women's suffrage began to gather strength in the 1840s, emerging from the broader movement for women's rights. In 1848, the Seneca Falls Convention, the first women's rights convention, passed a resolution in favor of women's suffrage despite opposition from some of its organizers, who believed the idea was too extreme. By the time of the first National Women's Rights Convention in 1850, however, suffrage was becoming an increasingly important aspect of the movement's activities.

Please login to EDUcasters.net by using free Gmail account or create one to access Online Courses , Live Courses , Broadcast and much more.